Crime in the Museums

The fact that Deitch's Art in the Streets exhibition was criticized from this angle was predictable. Though I am in complete disagreement with Ms. MacDonald's position, I am posting a link to the City Journal article. However, I am compelled to preface it with the fact—for those unfamiliar with her— that she is the author of many intellectual gems such as" The Myth of Racial Profiling.

Crime in the Museums 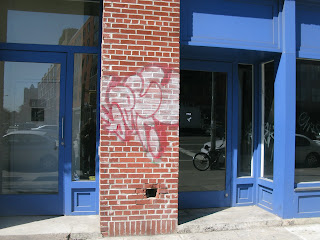 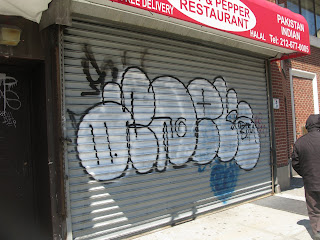 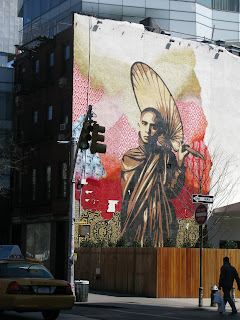 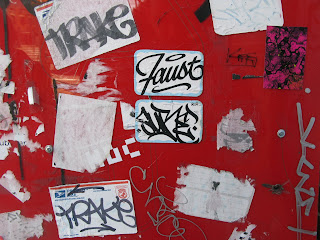 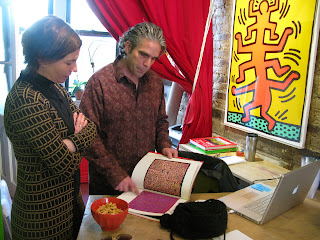 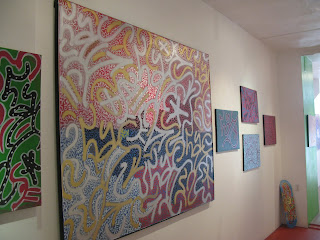 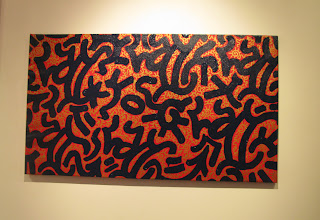 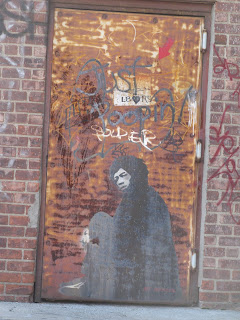 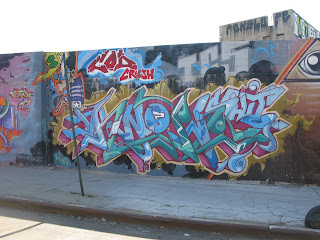 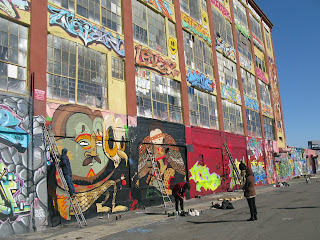 Recently I had the pleasure of hosting a private graffiti and street art tour of New York City. My guest was Raphaela Platow, Director and Chief Curator of the Contemporary Arts Center in Cincinnati. I tried to pack as much as I could into a few hours of cold weather.

We started off in the East Village, taking in SERF, ADEK, Shepard Fairy, Kenny Sharf, and FAUST and an abundance of others.

We also dropped by the Dorian Grey Gallery on East 9th street to see Angel Ortiz aka LA2's exhibition. We almost did not get in,. We caught Owner, Christopher Pusey on his way out, but he was kind enough to postpone what was doing and allow us to view the work.

The paintings tied in closely to the visual language Ortiz developed along side Keith Haring during an extensive period of collaboration between the two in the early 1980s.

Next we hit the streets of Brooklyn and peeped works by WANE ONE, EWOK, KEO , TATU XMEN, OS GEMEOS and others.

The highlight of the tour was a visit to LEE Quinones' studio where he was in the midst of painting work that will feature prominently in Jeffrey Deitch's "Art in the Streets" exhibition at MOCA in Los Angeles.

It was a real privilege to be among the first to set eyes on the work. IT'S OFF THE METER KID!! but sorry I cannot post photos until LEE gives the green light, which perhaps will be after it is unveiled at MOCA later this month.

Finally we stepped off to Queens and checked in at the 5 Pointz. For those that don't know it factory building situated on a full square city block that is covered entirely with graffiti art. It is billed as the largest outdoor exhibition of graffiti art in the world.

Unfortunately 5 Pointz's existence is under threat. It was recently announced that there plans underway to develop the location into hi-rise luxury housing.

Posted by At149st New York City Graffiti at 9:46 AM No comments: 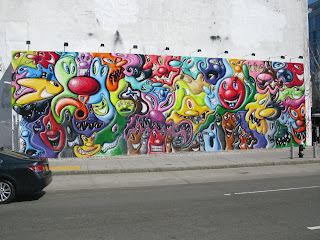 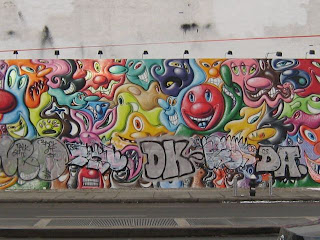 It great to see this wall alive with art again. Back in the 1982 Keith Haring painted it. This was followed in 1983 with a collaborative work by Haring, DAZE (Chris Ellis), NOC 167 (Melvin Samuals), LA2 (Angel Ortiz ), Kenny Scharf, the late A ONE (Anthony Clark).

For decades the wall remained relatively inactive except for the occasional throw up (which I loved) or advertisement . Then in 2008, Deitch Projects, the Haring Foundation and Tony Goldman of Goldman Properties facilitated a reproduction of Haring's 1982 mural in celebration of what would have been Haring's 50th birthday.

Since then, thanks to Jeffrey Deitch and Tony Goldman the wall has seen a series of murals related to Graffiti and street art. It has featured works by Brazil's OS GEMEOS (Gustavo and Otavio Pandolfo), San Francisco's TWIST (Barry MCGee), Shepard Fairey, a memorial to SACE (Dash Snow) and most recently a work by Kenny Scharf.

Most of the works survived without incident, but the Fairey and Scharf suffered repeated attacks. They got plastered with throw ups.

Maybe I was being naive and too idealistic in thinking that given Fairey and Scharf's longevity in public space and track record of collaborating with writers that they would be given a higher measure of respect than the typical street artist.

Either way hats off to Scharf for battling back.

PS I'd Love to see LEE Quinones bust one out with FUTURA on this wall when MOCA LA "Art in the Streets" comes to the Brooklyn Museum next year… anybody listening? LOL

Posted by At149st New York City Graffiti at 8:00 AM No comments: