My head is spinning with this news so I really don't know what to say, but I feel the need t share a few spontaneous thoughts.
KASE 2 was by far one of the most amazing people I have ever met. In a childhood accident he lost an arm and a leg. Despite that fact he became one of the most accomplished, respected and feared individuals in the artistically competitive and physically demanding world of graffiti.
Back in the days graffiti writers gathered at the 149th Street writers' bench to socialize. KASE was the type of guy who could pack the bench or clear it. As one of the movement's most innovative and influential style masters, young writers would flock to him in admiration, but he was also a very intimidating figure, known for his fighting ability and street hardened ways. As they say on the street "He had cats shook." so writers might also scatter upon his arrival.
My fondest memories of his work are the outstanding whole cars he produced with his partner BUTCH 2 on the 2 and 5 lines back in the mid 1970s. They really set the bar high for how style and concept cars should be done. Those joints truly got me lifted!!
During the course of writing Graffiti New York I interviewed one of New York's best-known graffiti cops, Detective Kevin Hickey and he shared memories about writers who made a memorable impression on him.
Hickey recalled receiving a call from another cop who shared a story about chasing a one armed youth who left him in the dust in a foot chase. Hickey laughed at him and said” I’m sorry to hear you couldn't keep up with this kid, but I'm also sorry to tell you that not only did he have just one arm, he also had just one leg." For me that summed it all up---KASE was extraordinary.
Much like Muhammad Ali, KASE was a boastful and charismatic showman and much like Muhammad Ali, he had unquestionable ability to back up every word. He ranks among greats such as PHASE, RIFF, NOC, BILLY, PART, CHAIN and DONDI.
He was the King of what? THE KING of STYLE!!!
I extend my condolences to his family, The TFP Family and his extended family of artists across the globe who mourn his loss.
Posted by At149st New York City Graffiti at 10:41 AM No comments: 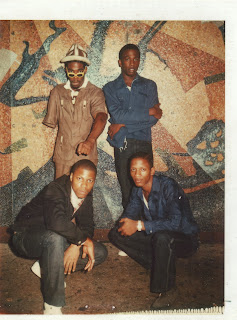 Yesterday SHIRT KING PHADE reached out to me with the news that his friend and mentor the legendary KASE 2 TFP had passed on.

PHADE shared his thoughts and this photo.

"As one of Kase 2's first born when it comes to what the kids call today 'Swag' I respectfully send out my condolences out to the Jeffrey Brown family. Me and Kase met in 1978, We quickly became friends and he began to mentor me as his protege. We fought side by side in the street, Kase respected me not as an underling but almost as an equal. he helped shape and groom my aerosol art career in its early stages. He always had perception as to what was next.He is truly 'King of Style'. Kase gave me an outline in 1978 of my name 'Phade'. He was impressed that I was able to scale his art professionally, and proportionately so we became piecing partners. Wether it was one of his moniker names or our names, we painted hard. Kase took me to clubs like Celebrity club, Harlem World, Renaissance ballroom, Audubon Ballroom. He enabled me to meet the heroes of the day such as Busy Bee and Kool dJ AJ. The Moore House Crew we called ourselves. That was Kase's family he always mentioned Dee,Glenn, Crusader Rob, Al boogie,Tray-Bag, Gill Seville etc. We became his extended family. He taught me how to stand up as a man and protect my artistic ability by any means. So many words can describe Jeff pka Kase 2 The Fantastic Partners. When Butch came home he embraced me also. They together embraced my team Lil Seen, Doze, Daze, Lady Pink, Harold, LC, EC3, CUE, he showed us all how to be and conduct ourselves as 'Kings" . There were collaborations that only pictures can bring bck the memories of those nights at Gunhill rd lay-up and bussin' 6 whole cars. Kase/Butch, Phade/Agent, kel139/Cos, Mare/shy 147,piecing with Skeme/Dez, Lil Karado/SO, Jap 115, Moet, Gnome etc. Kase was unselfish, willing to teach and always opened his heart and doors for others. I have been so blessed to meet and be a pivotal part of this mans life that meant so much to others. 33 Years of knowing a true King of Style I can brag about that, but missing Kase is gonna be hard. I wear my crown proudly and do daily watch the throne, that was Kases life....letting you know who the true Kings of Style are and whose crowns are on tight.
Thanks to a mentor, brother, historian, fighter, artist supreme, To the King Of Style thanks for the memories and the Love of the life game we are in Hip Hop."

Edwin Sacasa aka King Phade the one and only