All You See is….Sex in the City! 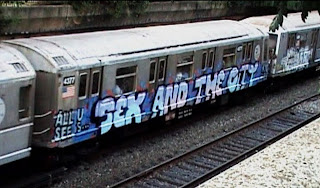 I can't recall how I stumbled onto this photo, but the instant I saw it I fell in love with— not so much for the style, but for what it signifies. I do not know who did the car or when it was done (has to be post 2001 because of the American flag on the car). I also have not ruled out the possibility that it is a Photoshop hoax, but it speaks volumes as to the influence of the 1983 documentary film Style Wars, as well as cultural importance of painting on subway cars. (Directed by Tony Silver and Produced by Henry Chalfant, Style Wars is widely recognized as a catalyst and a blue print for graffiti art movements across the world. )

This painting could have easily been done on a wall and those in the know would have still got the joke, but the artist chose a Subway Car—a real prize, especially in an era where the subways are relatively graffiti free.

Hey, hoax or not I love the concept!