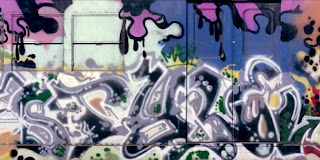 Henry Chalfant, the producer of the film Style Wars just shared some information with me regarding the film and its restoration effort.
Pitchfork features an interview with Mr. Chalfant, Linda Habib the film's line producer and two of the artists featured in the film-- Carlos" MARE 139" Rodriguez, and John "CRASH" Matos.
Read story at Pitchfork.
Support the Style Wars fund raising drive at Kickstarter.