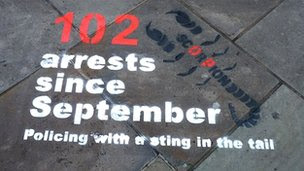 Looks like law enforcement in the UK is getting into the street art game.
Saw this on the BBC web site and had to share it.
-- Eric Deal
Gloucestershire Police have stencilled the number of arrests the force has made on streets around Gloucester.

The street stencils, applied at 30 city sites, are to highlight the force's "harder approach" to lawbreakers as part of Operation Scorpion.

Since its launch in September, the countywide operation "aimed at tackling any low-level issues" has led to 102 arrests in Gloucestershire.

Supt Rob Priddy said the stencils were a way to "draw attention to our work".