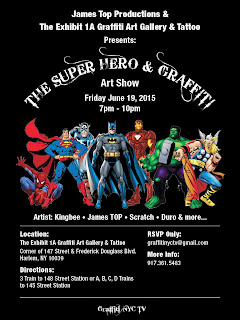 Posted by At149st New York City Graffiti at 8:33 AM No comments:

Museum of the City of New York: BLADE and Chris Pape book signing and artist talk 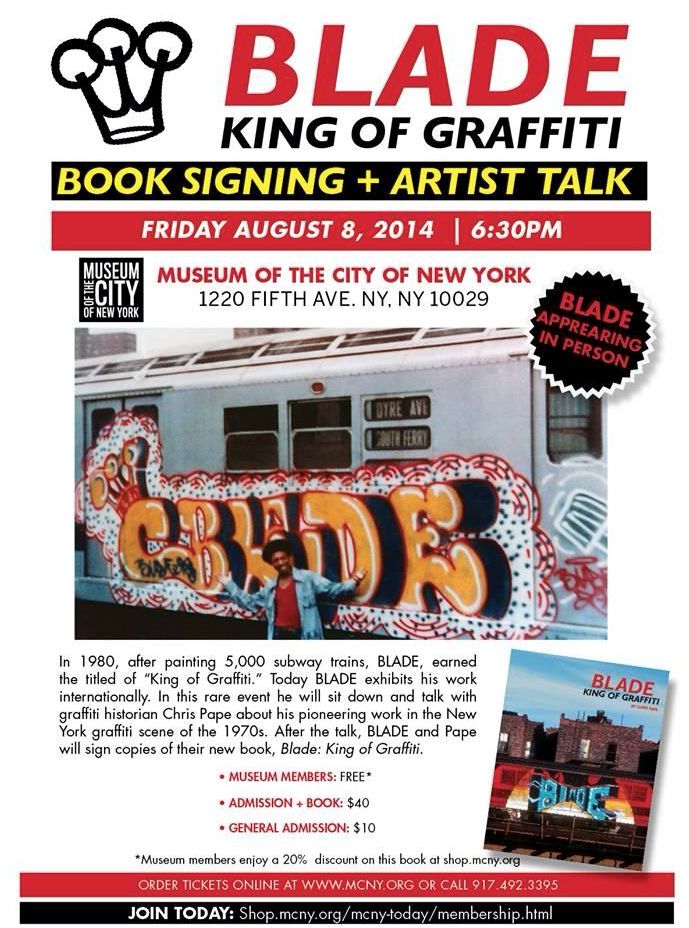 www.mcny.org/
Posted by At149st New York City Graffiti at 8:26 AM No comments: 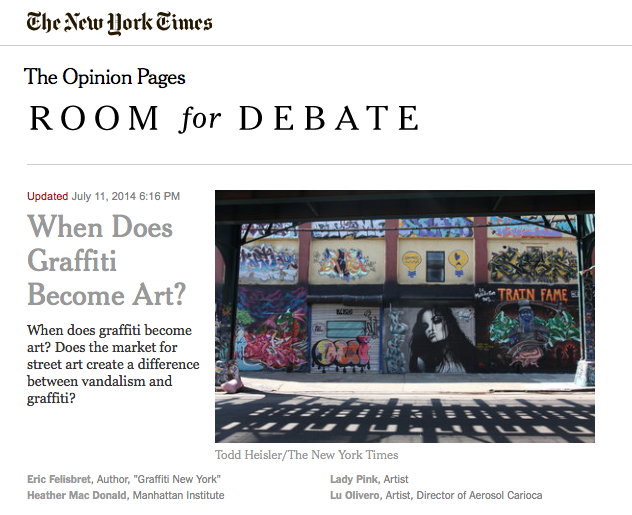 I was recently invited by the New York Times to contribute to a conversation about graffiti in their forum Room for Debate on their Opinion Pages.

Check it out. When Does Graffiti Become Art?

Lu Olivero, director of Aerosol Carioca and the author of the forthcoming Cidade Graﬁtada: A Journey Inside Rioʼs Grafﬁti Culture.

-Eric Deal
Posted by At149st New York City Graffiti at 8:22 AM No comments:


Don1, the King from Queens: The Life and Photos of a NYC Transit Graffiti Master
by Louie Gasparro


I just received a copy of Don One the King from Queens.  It 's extraordinary. It is a biography on one of the subway art movement's unsung heroes and it is told by one of his biggest admirers.   That's why the book so special.   Graffiti is all about influence from generation to generation.  During the mid 1970s DON was a leading style master from Astoria, Queens.  He was an illusive figure and completely vanished from the scene at the conclusion of his career in the late 1970s.

The author, graffiti artist KR ONE aka Louie Gasparro, also of Astoria, was a generation after DON and huge fan of his work. Gasparro spent years trying to track DON down. Eventually he did, but maintaining a connection with DON was not an easy process as DON's life was quite complicated — as revealed in the book.

DON was photography major at the High School of Art and Design and meticulously documented his work on the subways.   After Gasparro saw the collection of photographs, he felt it was imperative to tell DON's story.  He convinced DON that his life and contribution to graffiti history deserved public recognition — thus the book.

What makes this book a real gem is the fact that it does a few things no other book has. It puts Queens and the BMT subway division on the map. When it comes to documenting the history of New York's subway graffiti movement, the other boroughs often overshadow Queens. This book firmly establishes Queens' place in the history of style writing. It is the tale of a Queens bred style master that ranked among the best in the city.

The book also features almost 200 never before seen photographs — mostly of the BMT subway division shot during the mid 1970s.  Graffiti on the BMT division has not been very well documented, so this collection is extremely rare. It showcases work by DON and that of his contemporaries, such as DEAN, GEAR, SLAVE, JESTER, BUTCH 2, BOMB ONE and LEE. The book features a narrative by Gasparro as well as recollections from DON and many well-known peers, including LEE Quinones, DAZE (Chris Ellis) and BOMB ONE (Al Diaz.)

The book is a real treasure.

DON ONE— A Legend Well Lived.

It is available on Amazon.com. 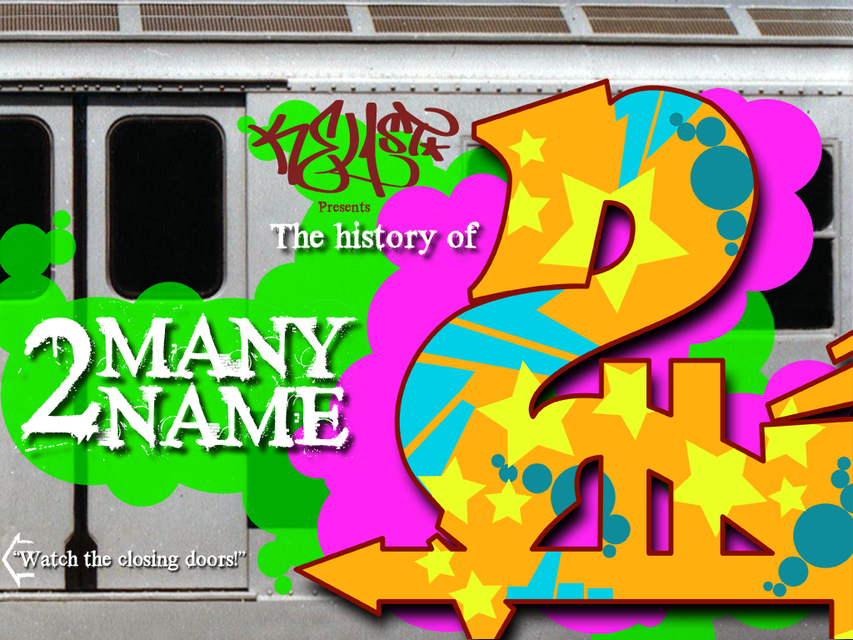 Seems like there is a new graffiti related product on the market every week, but it is not often that I see something that grabs my attention the way this new app did. It is called 2 Many 2 Name. It is an homage and analysis of the history of the numeral 2 and its use among several generations of New York City style writers.

What is unique about the product is the fact that it is authored by one of the movement's most well known style writers. KEL FIRST.  KEL was very active painting subways during the time period on which the app is focused so he offers an intimate perspective.   The app is both a history lesson and a learning tool.
Required reading/viewing for any history buff or aspiring style writer!!

Describe the 2many 2 Name project.

The 2Many2Name project is about educating the current school of writers on the history of the number 2 as it was used in a tag. The app unveils the blueprints of wild styles created and the color choices  made. This is the first time we are able to “look underneath” the amazing burners of that time. I wanted to “see” the outlines that transformed into these masterpieces. I was inspired by them and this app enables me to dig up old photographs I had taken and to reminisce of my childhood. I still paint and draw today so it still inspires me, as does the some of the amazing new works I see on social networks today.

What inspired you to put the project together?

The 2Many2Name project came about from my passion and interest in graffiti. It is a homage to the writers who were pioneers and influential in establishing an era of Wild Style that I grew up with and was inspired by.

The ride expresses my excitement when I first encountered these works. The names (which is a short list) were the trendsetters of the time. Graffiti has become a global community and there is void in the historical timeline that is missed by the current crop of books on the market. 2Many2Name fills that void. By unveiling the blueprints that open the door of the writers style and sharing the color palettes used.

This trend reached so many writers and the works created with it is overlooked. The work that appeared on trains needs a story to be heard and seen from a communal point of view. Today so much is shared on social networks but an unbiased and all encompassing collection of thoughts and experiences are in short supply. There is more to us than just even the most identifiable tag, the majority of writers of this caliber created many styles and mentored each other in various ways. I wanted to begin that story with 2Many2Name.

How did you go about selecting artists that would be featured in the project?

The decision to create the app was easy, to choose which pieces are included was difficult. I have a pretty dense collection of trains so editing was hard to say the least. I wanted to get a sampling of more than two wild style generations, at least three to four. This was the main requirement, so the cross generational influence can be seen and discovered by the writer.

Another requirement for 2Many2Name roster was picture quality, most pictures are with a Kodak 110 or 126 camera. This presents issues of clarity and scalability. It certainly created a pile of pieces that were great but for time constraints and screen real estate they were cut, maybe a 2Many2Name app 2? LOL.

Why made you choose digital media over print?

My decision to use digital media over print was because I wanted to the experience of our history to be heard and seen. If I had gone the way of print that translation would be lost. That would be an expensive journey to lose my point in creating a historical artifact.

As you know, I have a long career in digital I have always wanted to bring current technology to graffiti. This app gave me the opportunity to do it and continue the work I started with Voice of the Ghetto Productions back in the 90s. Which is very similar in that it used technology in an immersive way to educate and inspire. Today it’s an app back then it was a CD-ROM with links to media online.

How did your personal history as a style writer effect your approach to the project?

Being a style writer from one of those time periods gave me the added benefit of having first hand knowledge and experience about the subject. It was what is needed to be able to design, program and produce the 2Many2Name app. I did not have to struggle with collecting the content. This also gave me a nice opportunity to put my professional hat on and consider the creative choices that presented 2Many2Name in the best possible light technologically speaking.

Is this something you worked on independently or did  you produce this as a team?

I have a small team I work with, mainly my B-Girl wife Annabel. She is instrumental in time management, copy editing, marketing and promotions. And then of course my two daughters Sophia and Selena who are my app testers. If a 4 and 6 year old can figure it out, then an adult can do it, right? LOL!

What are your hopes in respect to how this will inspire newer generations of artists?
As 2Many2Name informs, inspires and elevates the game. 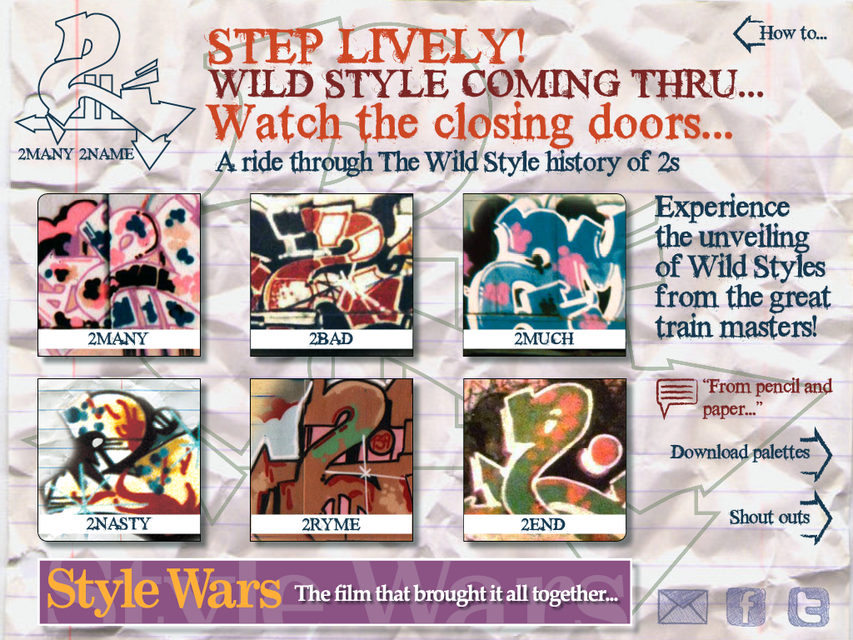 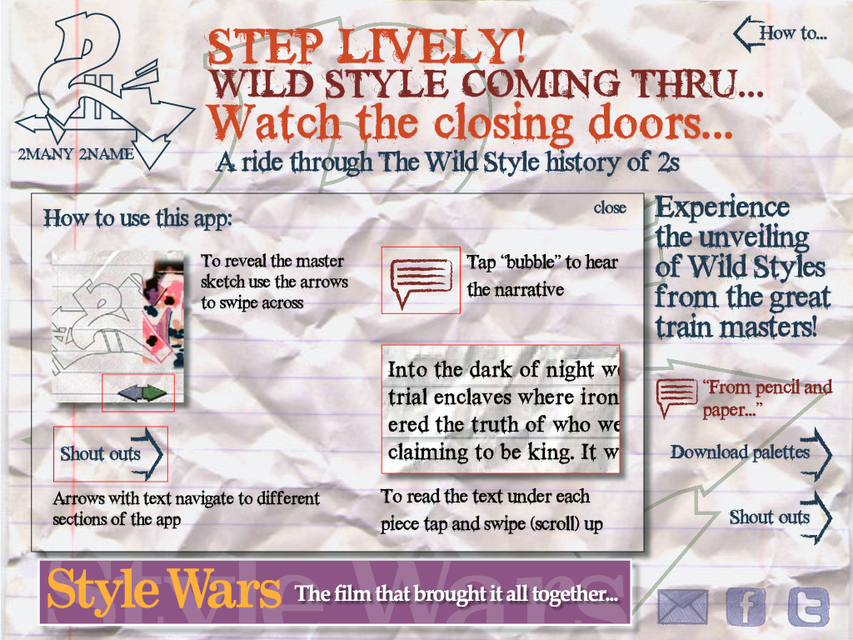 Just got a cool new Book on the Miami scene. The book features a broad collection of Miami murals from the 1980s to roughly 2011.  Over 300 pages of strictly photos in this book.

The verve of the South Florida graffiti art scene from the 1980s to present is captured in this landmark book. It offers unparalleled access to the most significant graffiti art works ever produced in Miami. Discover South Florida's graffiti art history throughout its various stages, dating from its classic works of the 1980s to the present influence of graffiti art at the annual Art Basel Festival. Included in the 310 full-color images are works by V05, DFC Crew, 7 UP Crew, the Ink Heads, and many more. Each image is accompanied by key caption information, making this an image archive that serves as a comprehensive catalog of Miami's greatest graffiti art. It is the ideal reference for all graffiti artists and fans of the medium.

Miami Graffiti is available on Amazon 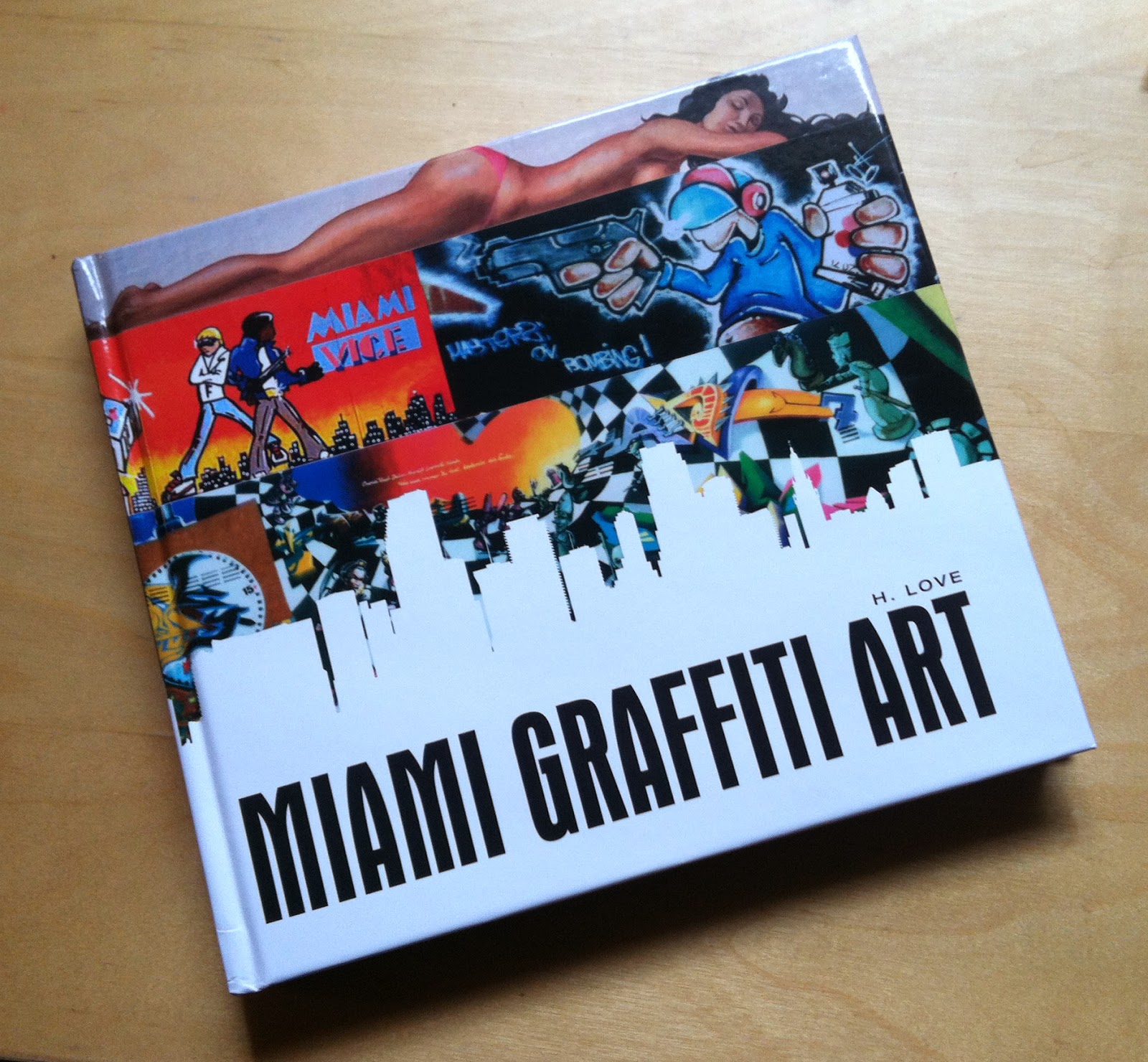 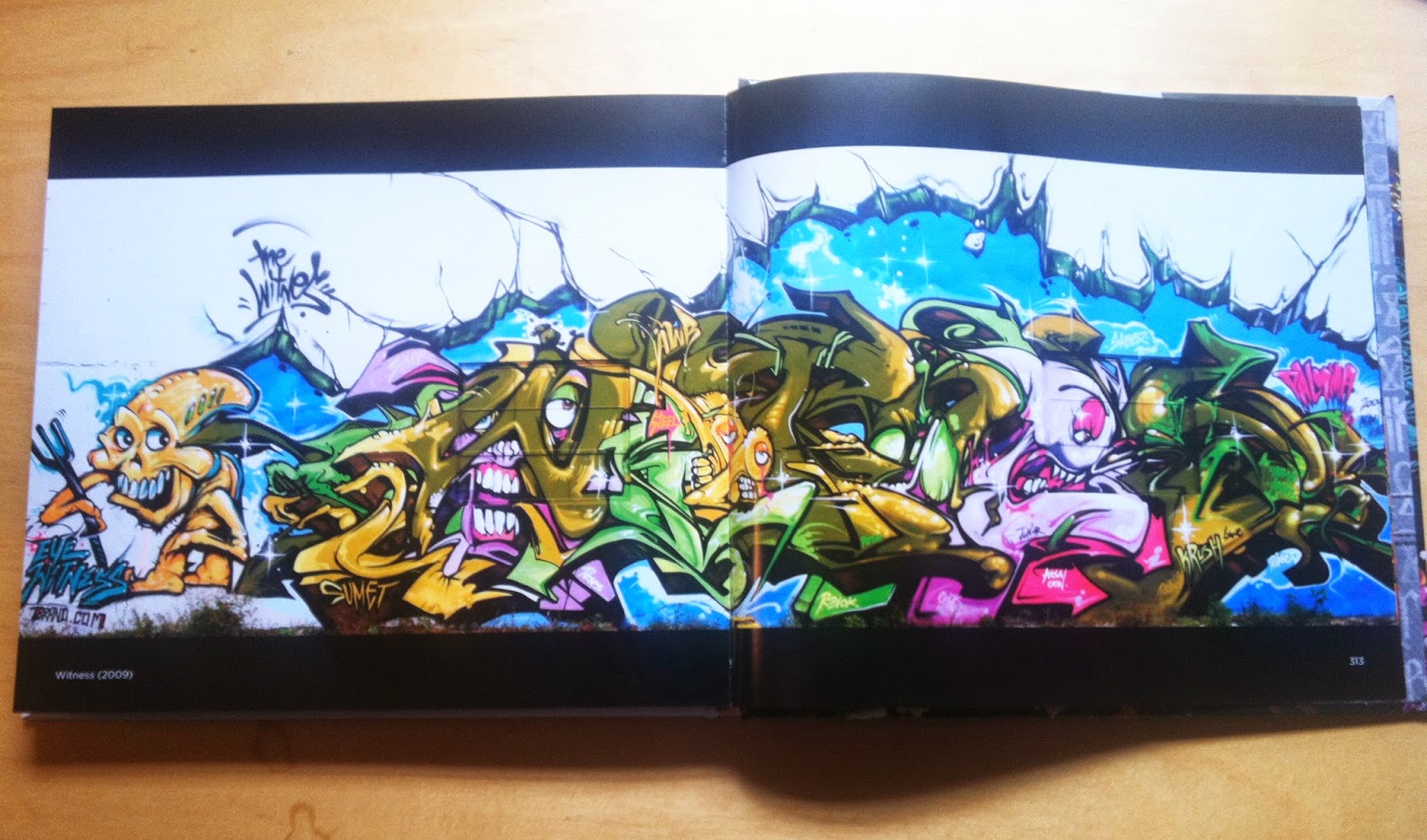 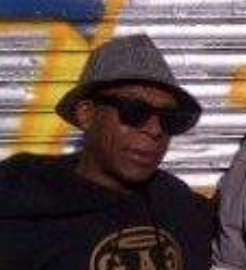 We extend our condolences to the Lee family and to all of his friends in the graffiti community.

SHADOW RIP-- A man with talent, knowledge and warmth. He will be deeply missed.